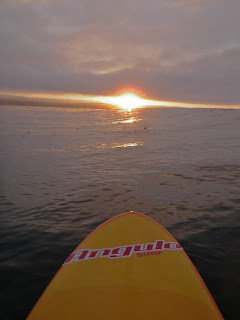 The plot line of the story for these last few days is, who will win the race between the incoming rain and wind storms vs. the incoming ground and wind swells. So far it hasn't been bad. There have been a lot of good waves ridden in and around bouts of bad winds and rain.

Dawn patrol greeted chest/head high waves in light offshores and good conditions Monday morning. The usual suspects would be out, but I beat them all into the line-up except for K on his 8-8 SUP, who blew by me in the pre-dawn darkness before my warm-ups were even started. No matter, I couldn't see in the 0615 dimness anyway. I paddled out at around 0630, still too dark for me to see and catch waves, but not too dark to begin the paddle out through the incoming whitewash and into the most likely line-up. K headed to GDubs, and I stuck around Sarges. 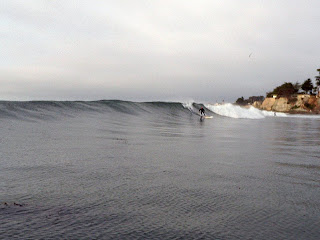 After a couple waves, three other regulars joined me and that was about it for an hour or so. The waves were fairly consistent with the best waves coming during the sets of NW/WNW ground swell. I surfed up and down the reefs, not staying in one place for too many waves, and getting my fair share in four or five locations. Maybe everyone slept in this morning, maybe the internet hadn't really started buzzing, but for whatever reasons it never got crowded.

There really wasn't enough energy in the swell to overcome the higher tide, and by 10 o'clock or so, it was pretty much done at the lower reefs. Up at the point though it was booming. Solid overhead/double overhead waves were blasting in, 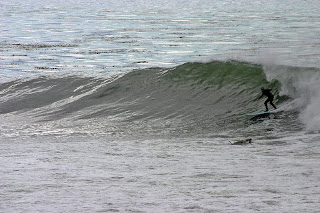 but pushing a lot of water. Most riders were not able to paddle in except in the steepest sections. Without less water between the wave and the reef, few down the line walls materialized and the corners were tapered like a slouching drunk and lacking in any real drive.

At sessions end, I paddled in as the waves were washing up and touching the rock walls in the cove, leaving little room for error on the take out, especially with a bigger and more buoyant SUP. But the take-out was smooth and me and my board exited unscathed.

Tuesday was the best Tweener, with the dawn patrol seeing a short-term gale force squall at the opening bell. The NWS was calling for absolutely 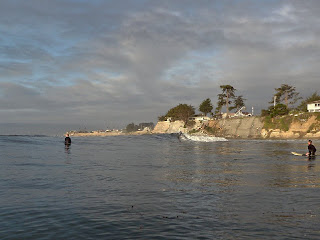 craptacular weather and everyone except the GrayOne stayed in bed. But the GrayOne, being the stealthy and core surf rat that he is, hit it early for the score. He surfed very good waves (the squall passed) and it blew offshore for the next couple hours as the swell increased in size and quality. He says he got an afternoon session in also that was even better. Me, family duties called. 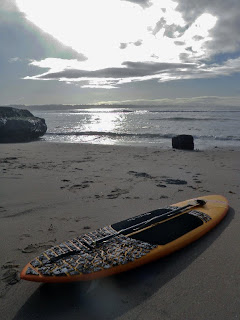 The ground swell peaked this morning. On top of it was nearshore wind swell that put a warble on some of the wave crests but it didn't diminish the quality of the best waves. Sets were consistent, going overhead to some double overhead, even on the lower reefs.

My first wave was an overhead bomb taken off the concrete wall at Sarges. I kicked out at the Brown House, some 300 yards down the line. The wave put up a number of ramps for banking and driving off the bottom...even a couple of fast sections for driving through and getting the adrenalin flowing. I kicked out at the Brown House take-off, riding over the back of the folding lip and into the maw of a perfectly formed right hander that I had illusions of doubling up on. But it wasn't to be. It was coming too fast in water too shallow and I was too slow. I was the only one there so I kicked my board up into the falling lip, hoping it might punch through. Fat chance...too big too buoyant. I tugged my leash hard, pulling the board back towards me and glancing out to sea. Another beautiful peak was heading my way, and this one looked makeable. I scrambled to my knees while pulling the paddle into canoe paddling position and started digging hard for the outside. I barely had time to hop to my feet and bring the nose 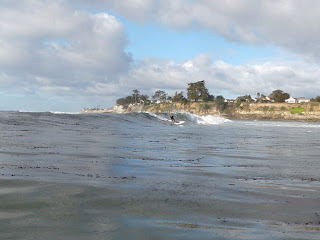 around as I steered a line for a diagonal take-off in the steepening wave face. I was deeper than the usual take-off for YH so I had to drive through that section for another long ride to Apartment House Point. This ride was good for 250 yards. And that completed my first two waves of the session. A nice double up netting about 550 yards in fun walls and sections.

The remainder of the 1.5 hour session was just more of the same. Waves and sets were very consistent and there wasn't much down time. Early on, few people were riding where I was taking off at Sarges. Everyone was on the main peak and I just kept looking for the swing wides which were offering up a couple hundred yard rides at a minimum. I caught a couple more doubles during the course of the session. The crowd was relatively thin but started to thicken around 0930 as word was getting out. Not a lot of young people surfing, mostly retired guys and their wives/girlfriends, and working folks who had time for a quick session in between work.

At 10 the tide was high enough for me to think about getting out. I was tired, but stoked from surfing hard in good energy and had to get ready for the meeting with my tax lady. No complaints, just another great session during this series of storms and swells.