The night before the race it rained cats and dogs at our place near Paia. The wind and the rain made me think, storm surf. It was way less than the idyllic Hawaiian sun, surf and perfect wind conditions I had envisioned. But that's what makes it real, so it was game on. 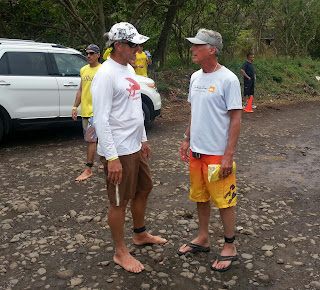 Mariposa and I picked up Kyle, Carla, Lauren and Scott at Kanaha for the shuttle ride north to Maliko. Turning onto the dirt road and into the gulch was an instant picture of what it looks like to cram six pounds of stuff into a two pound box. Boards, people, cars, trucks, tents were everywhere. Thank goodness for the Maui County Sheriffs who were doing a first class job of traffic control. It was the polar opposite of what the gulch usually looks like. To top it off, the heavy rain had triggered a flood advisory so the creek was flowing gangbusters with plenty of ponding and patches of mud to negotiate.

This of course was all taken in stride by locals and visitors alike and the mood was festive, fun and exciting. In comparison to the Paddle IMUA last week, the Olukai definitely feels more "commercial". That's not derogatory, it's just the way it felt to me. The IMUA is really a fund raiser for a local community service organization while the Olukai is in major part a professional race with a hefty purse for the top six male and female winners. There are also a lot more participants in the Olukai race. 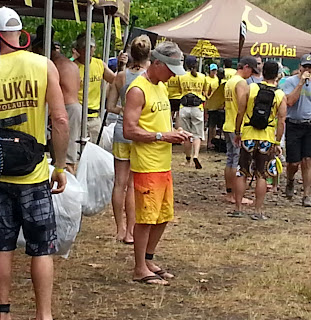 331 paddlers made their way out to the water start at 11:30. Prior to that the event organizers moved us all very smoothly and flawlessly through the check-in, registration, safety meeting, and pule (with group hug during which the wind in the gulch increased five fold).
Scott and Lauren entered the water quickly and made their way close to the front of the pack, while Kyle and I took our time paddling out through the choppy cove channel and into the open water to wait near the back of the pack.

We had five minutes until the green flag fell as I sat down to wait for the start of the race at noon. Good thing because the paddle out was strenuous enough that my legs needed a short rest before beginning the 8-mile paddle to Kanaha Beach Park. Thirty seconds later, 100 yards to the front, all the racers jumped to their feet and started paddling downwind. So much for the rest break. The green flag waved and the race started five minutes early.

Unseasonally light trade wind conditions had prevailed for several days preceding the race, but today the "wet trades" had picked up, and the wind had freshened significantly, putting up more than enough bumps and glides to have fun. There was also a healthy late season northerly swell in the water, adding to the rhythmic rolling of the sea surface, and delivering waist high to overhead waves over the reefs at Kanaha. 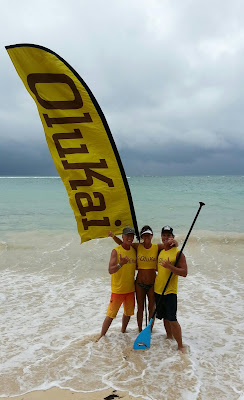 Connor Baxter won the race, finishing in 48 minutes at an average speed of 10 miles per hour. I was hot on his heels at twice the time and half the speed. He neither waited for me to catch up with him, nor worried that I would do so. This thankfully took a lot of pressure off me so that all I really had to worry about was making it through the reef at Kanaha with board and body intact.
A couple days before the race my buddy Bill Boyum had taken me out to the reef to show me the best spot to cross. That was in no to small surf conditions, and on the day of the race he gave me an alternate choice which I used because it was safer.

My downwind paddle was just a normal downwinder for me. The main difference was instead of having several or no people around me, I had a couple hundred people. I really benefited from my coaching session with Jeremy Riggs (paddlewithriggs.com) earlier in the week, and caught a lot more bumps and glides because of what he taught me. Mahalos Jeremy!

Soon enough I had to make the decision to turn into the beach and cross the reef. I visualized Bill's geographical landmarks as best I could remember from our conversation (having never taken this route before) and headed for a spot in the reef that looked deep enough to cross with little risk of getting bucked off and tossed in by the turbulent incoming surf.

The waves were incessant. No lulls, just constant waves some bigger, some smaller. A guy older than me (hard to imagine, at least he looked older) went knee paddling by me, into a wave and got wrecked over the reef. I wasn't going to knee paddle, no, I'm riding stand up over this reef.
I had to plop down on my board and straddle it while I waited for the guy to get washed out of the way before catching my ride. I picked the one I wanted, jumped to my feet and stroked hard to pull into the waist high wave that was now lifting the tail and carrying me forward. I was now moving swiftly on my wave, jamming across the reef. "I've got this made," I thought, just before my board made a violently uncontrollable right turn from which I could not recover. I flew off the left side of the board, hat going one way, board the other. 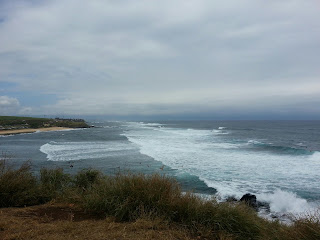 Fortunately I had made it most of the way across the reef. I recovered quickly and was up and paddling toward the finish line a half mile away in my version of a sprint. I blew past the old guy who by now was running on fumes. Now I was neck and neck with my real competition, a 12 year old boy (the next Kai Lenny no doubt) and a young local woman easily less than a third my age. (The next Andrea Moeller for sure.) I was actually staying on pace with these two kids when from out of nowhere I caught a series of nearly invisible bumps that put me way out in front for good. I'm sure they were disappointed that the gray haired haole smoked 'em. (Actually, I'm sure they had no idea what odd machinations were coursing through the mind of an old white guy they hadn't even noticed.)

So what do sprinting and paddling have in common? I don't know either but there was a 300 yard run to the finish line from where we landed. I whipped out the GoPro from my hydration pack front pocket and videod my jog (and the adoring crowd) to the finish line as Scott joined me. Kyle was in a few minutes later and we ran with him to the line and the thoughtfully produced and thankfully received cups of cold water.

I was more tired from the run than the paddle but recovered quickly to join up with the gang for the after race grinds, awards ceremony and entertainment. By now a light but consistent rain was falling putting something of a damper on the festivities. (I know, cheap shot.) Kyle and Carla needed to get back to Kihei, and Scott and Lauren to Papakea. Hogan (winner of the Paddle IMUA prone paddleboard division) and his girlfriend Tracy (who teaches at U of H Maui campus) had joined us for eats under the canoe club pavilion roof so after lunch and some chat we said our farewells with hugs and smooches all around. 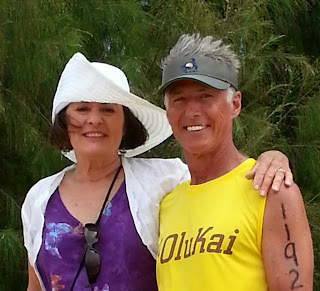 The race results are all over the internet and Facebook so I won't write them here. This was the fifth edition of the Olukai race. There is no doubt that it is an astounding success that has been wholeheartedly embraced by the local (and world wide) paddling community, and will continue to grow. It will be interesting to follow how Olukai manages the future growth and popularity of this amazingly successful race.

I've been watching the Ho'olaulea for the last couple years and have always been attracted by the excitement, the romance and the mystique of the fabled Maui Maliko runs. That I have been able to participate in both the Olukai and Paddle IMUA races these past several weeks has been a real blessing to my life and something I will long remember with the best feelings.
And yeah....Maui No Ka Oi. Believe it!

Postscript: I've got plenty of video on the cards of this event as well as the Paddle IMUA. But since I'm posting everything on my smartphone, I won't be able to make the movies until I get home in a couple weeks. Stayed tuned.
Posted by srfnff at 9:36 AM