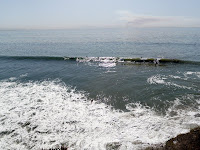 I paddled out mid-morning for the first of two sessions today. The slightly diminished south of yesterday was still active at the reefs. I took a quick look at Scimi's but there were quite a few surfers sitting at the number one and two spots so I thought I'd try to grab a few up at Tres 8's. The bad news was that in my rush to get out of the house I forgot my booties, and my backup pair were in the closet at home. Dohw!

The 8's was pretty crowded too, but the little inside wave was working as an alternative to 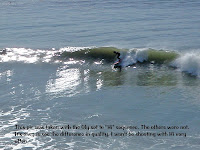 riding the bigger set waves. The tide wasn't so high that the rebound off the cove walls was bad (not yet anyway), as a matter of fact it was fun. There was a lot of backwash in the faces so the takeoff was a bit of an off balance alley-oop with a pretty clean line until about 10 ft. from the wall where the rebound would just throw you up in the air or swamp you. That worked pretty well for about an hour. Then the tide got too high, making it really hard to stay on the board on take off. Too much bump for this old man.

I was pleased that the 5-11 GB2 worked so well in these fat-like conditions though. As the 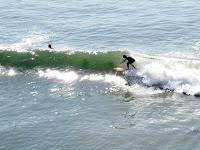 backwash increased I could have used another foot or two on the board just to cut through the bumps, but overall, the board did good. I think things could have gone better if I'd not forgotten my booties. Into the second hour my feet were pretty numbed out, and popping up felt like I was standing on peg legs. I could hardly feel the board beneath my feet.

The evening session was different 'cause I waited for the low tide...the really low tide, in hopes that Roots would go off. I paddled out at Three Palms first (Roots wasn't breaking) with only a couple people out and rode 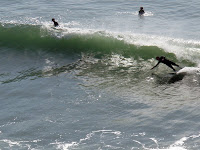 a few small knee-highs almost into the beach. Even though it was relatively late (5:45PM), after my first few waves the crowd went from two to 15. What! Yeah, I couldn't believe it either. The cool thing is that about every 20 or 30 minutes a nice multi-wave set would come through providing lot's of rides. At around 6P an eight or nine wave set came through and Roots got two nice looking shoulders out of that set. So I paddled back out there.

Around 6:15 and for about 20 minutes the place went crazy. Many waves in several sets came through and it was just an arm busting merry-go-round. I 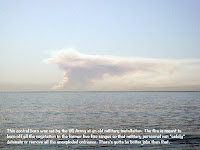 pulled down a lot of waves. No one out but me and two women, one of whom was instructing the other in how to surf. After a couple waves I had to tell the novice that the wave was too advanced for her (she was getting killed on anything she tried) and she need to go over there...the next spot upcoast. She knew I was right and she and her friend moved over, leaving the place totally to me. Nice!

As I was kicking out in the shorie on one of my waves this woman is waving frantically to me on the beach. Wendy got my picture on her IPhone on the last wave. So I ran in, gave her my email address and she emailed me the pic on the spot. (I gotta get one 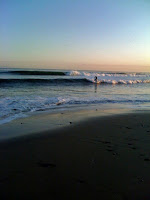 of those phones!) Thanks Wendy!

Near dark the wind stopped completely and the sea surface turned to plate glass. The deep purple oncoming night sky cloned itself on the face of the deep. Sky and ocean melded together into that remarkably beautiful feeling that comes when witnessing nature on it's own terms. I was way blessed and fortunate to have gotten that little window of swell and tide just right. It capped off a great day of surfing. I was in the water until dark, but by then the tide was too low and the take-off peak was just a heaving, unmakeable section. I changed out in the lot in the dark, the light evening wind raising goose bumps on my bare skin. Man, I love to surf.