I can't believe how great the weather has been this Spring. It is certainly heads and shoulders above the last three years. I don't know if it's El Nino or what...but thank you and I'll take it!

It was a very good day to start the research on my new SUP. Kirk over at L41 Surfboards is going to be the shaper, primarily because he's a younger guy with current era sensibilities and

skills who is into design innovation. He grew up on shortboards and also SUP surfs. He got the SUP virus while on a trip to the tropics, and immediately upon his return he shaped himself a 10-footer. In less than a year he shaped his next SUP, an 8' 8" quad that surfs like a shortboard as opposed to the longboard feel of his bigger board. I've got an idea for a SUP that I haven't seen before which I'm going to keep under my hat until it's built and I've surfed it.

I paddled out at Sarge's hoping for as much wave energy as I could get on this weak south swell. SoCal was experiencing some really nice waves and I figured we'd get something, but a whole lot less of whatever it was. High tide had it swamped but the upper reefs were showing some fun waves in the 2-3' range. This gave me a good chance to warm up by paddling around in calmer water and get the feel of the 8-8 which is much smaller than the 10-0 Angulo I'm used to. 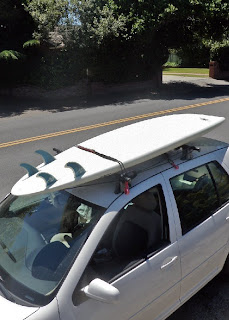 Dimensions on the L41 SUP are ample really at 8'8" X 30" X 4 1/4. Total volume equals 136 liters. My Angulo comes in at around 150 liters, which in reality is more float than I really need. My goal for the new performance SUP is to find that perfect balance between stability and performance in a shorter SUP, that matches my ability. After surfing Kirk's 8-8, we're thinking we can go 8 foot something by 30 or so, and four and a half inches thick for a total volume of 130 liters. The secret to handling the lower volume is in the plan shape which will be unique and seldom seen, if ever, in the SUP world.

But back to Kirk's L41...at 8-8 I was expecting some difficulty in balancing at rest but that was surprisingly not the case. The board was very stable in the line-up, waiting for waves. The next surprise was how easily it caught waves. I was expecting to have to really work hard to pull myself in, but getting in was a cinch, even in the mushiest waves. I rarely missed what I went for. What wasn't unexpected was how well the board surfed, as I've watched Kirk surf it several times before. The board does in fact surf like a more modern shortboard with the standout feature being how well it lays over on rail. Kirk contours his rails and bottom so that his boards are fast and maneuverable. No rail catching here. And he's shaped the rails so that water sheds off instead of catching, like the more boxy rails of the larger SUPs, which allows for the quickest turns from a full stop or while surfing that I've experienced on a SUP yet. The rails are blended into plenty of thickness on the deck so that paddling and float are not negatively affected by how well foiled the rails are for surfing performance. He also innovated with a quad fin set-up, which enhanced speed and performance. 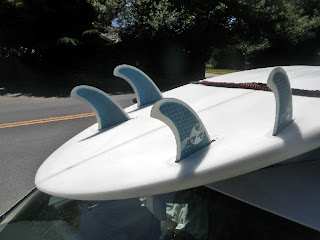 I knew there would be something of an issue with yaw though...that just had to come with the territory and it's something anyone who wants to look at going to a short SUP will have to deal with one way or the other. Kirk and I both decided that modifying my paddling technique to accommodate for the shorter rail line was going to be the best way to reach that balance of surf-ability and paddle-ability, especially if we want to go with high performance fins like quads or even a twin fin set-up. We're still talking about that element of the build though, so nothing is really decided quite yet.

The session was not completely uncrowded because of the weather and the swell. But everyone was super friendly and chatty and just having a good time. Michael and Priscilla were out, snagging waves at GDub's, where I was riding wide and taking mostly leftovers that were fast and fun on the inside. Mike was out on his giant 12' Laird and it's almost comical when you line these two short and long SUPs up side by side. The inclination is to think that riding the short one can't be done. But it can, although it's a different thing, like shortboards and longboards. Rick was out on his 9-2 and started up a spirited conversation about how short SUPs will eventually go. How short can they go? Who knows...there's a lot of innovation out there right now. Sam paddled out with me from the gitgo on his 10-0 Angulo and we traded boards for a while. He was stoked and may be Kirk's next surf SUP customer. (After me Sammy...gotta wait yer turn.) And Andy was out on his new Angulo fishing SUP, doing a photo shoot or something for an upcoming promotion...or providing evidence of all the white sea bass he's been bagging this Spring.

I capped off the four-hour marathon test drive by surfing some small and really fun fast insiders down at Yellow House. I've never been able to surf this one fast little line that zippers right along the edge of the rock reef, but the 8-8 took it on with ease. I was able to take off over the main rock pile and surf the quick little peelers, staying right in the pocket all the way to the off the lip section at the beach. Never been able to do that before on a SUP.

What a way to get stoked up for the Summer. Bring it!
Posted by srfnff at 4:03 PM