I didn't surf this swell for reasons stated below. As the best swell we've seen after the November 2 and 3 swell this year, I was looking forward to surfing some size again. Unfortunately it wasn't to be for a couple reasons. 1) The swell peaked overnight, in the dark. 2) This swell didn't last very long. 3) As it came down coast from the Gulf, it was more or less emasculated by strong south winds which took a lot of the power right out of it.

Swell numbers peaked at 10PM Wednesday night, showing 12.3 ft. at 17 seconds, 290 degrees. From there it was all downhill. Long period swell was pretty much gone by daybreak, and although there were some time intervals of 12 ft. at 14 seconds, the morning high tide gutted anything really good 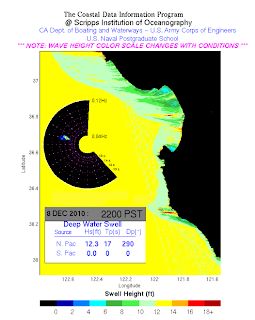 from happening. At 14 seconds, we're talking the lower edge of ground swell, real powerful deep water swell, and the upper rim of wind swell, nice but just not juiced up groundswell.

The swell came and went fast. Those paying attention (which was just about everyone 'cause that's what wave droughts do...force us to pay attention) got some fun rides Wednesday afternoon/evening as the tide dropped. From my point of view, those were the best waves and the best surfing.

The NWS folks (of all people) called it right on when they stated that the swell would be smaller and much weaker than the buoys would show. This was primarily as a result of the strong south winds that extended from my home surfing grounds, all the way up into the Gulf. In a sense, the south winds just blew it flat.

This isn't to say there weren't some fun waves, it just wasn't as good as most of the commercial sites trumpeted, and was therefore something of a disappointment for a lot of peeps.

Every November and April I usually come down with a sinus infection due to pollen and allergies kicking in. This year was no different except all the symptoms just wouldn't go away. So instead of going surfing, I went to the doctor to try yet another allergy med. At this writing it seems to have worked and I was able to get some waves at the beaches yesterday. I'm blaming La Nina. Two years ago we experienced a mild La Nina and the same thing happened. Let me just say it, La Nina is a bitch!
Posted by srfnff at 7:43 AM