Early Saturday AM, Andy and I sped up to South SF to pick up the three Angulo EPS/Epoxy customs that arrived

late the night before at SFO. We loaded 'em up in Andy's sub and headed back home. Stopped by Whitty's shop and unpacked the boards, generously leaving all the garbacious board packaging for him. Nice!

The weather was funky and raining over the weekend so we just had to wait. But it gave us time to leisurely put down the deck pads and the patterns/mosaics we wanted. I opted for the Blane Chambers inspired small, ultra traction pieces with a full paddling pad in the center. Andy did an artsy thing with a sine curve on the tail of his board which goes well with his craftsman-like approach to everything. (Me? "This is taking too damn long, just cut 'em up and stick 'em on there.")

Tuesday looked like a real surf possibility and on my way home from an errand I took a look at Yellow House. Surfable! I straight lined for home, got it together and was in the water by 4:30P. Surfed by myself most of the time, but Marsha paddled out on her Angulo custom SUP about 5:30 and we surfed until dark. 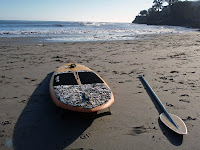 This new board was supposed to be a carbon copy of the 10' demo board Ed brought over for the Sacred Craft in October. I rode it a couple times, and turned on Andy and Sam to the board. We all dug it so much that we ordered three from Ed. But when Ed sent the pics of the finished boards prior to shipping, mine was different. What!?! I shot Ed an email..."whatup?" "It's the next generation, yer gonna love it." But what if I don't? "No worries, I'll make you another one." Deal! 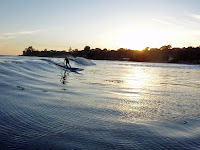 It's almost impossible for me to get a really good feel for a new board after riding it only once for a couple hours. But my general first impressions are as follows, and for my own frame of reference I've used the Angulo 10-2 production model for comparison.

The shape, outline and configuration of the two boards (10-2 production and 10-0 custom) are very similar. Re the new board: number one difference is weight. Coming in 4-6 pounds lighter makes an incredible difference in maneuverability, especially for a lighter guy (153 lbs.) like me. The board did everything the 10-2 does only faster and crisper and with much less effort. Second biggest difference would be rocker. With more nose rocker I could turn harder and make more tail pivoty bottom turns, as 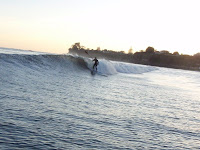 well as more radical turns down the face of the wave from the lip, in steeper sections. The board handled well in those situations and would come off the bottom, and into a turn back off the lip of the wave and down again without pearling the outside edge of the nose in the trough. It took a fraction (by a least half) of the weight, strength and effort to get the nose up when dropping back down into those steep places. Major improvement!

As stated earlier, I only rode it for two hours in small waist high waves that were pretty lacking in punch. But there were enough sections and steep spots in the wave to get a good idea re board performance and handling qualities. In more energized waves the board would work even better, but it was still fun in the small surf, which it has to be in order to qualify as a good all-arounder. As for ease of noseriding the verdict is still out. I surfed it with my small thruster fin set-up because of the low tide and the kelp. I set the center fin at the same place in the box as I have it set-up in the 10-2 so I'd be comparing apples to apples. The next thing I want to do is slap in the new Rainbow Pivot and see how that works. There were definitely times I could have run up to the nose, but decided against it as there was no traction whatsoever in the 38" forward section of nose. Clear Grip or Monster Paint, I still haven't decided.

Rails are soft 1/3 forward and hard all the way back to the tail. Bottom flows from a small concave nose into double barrels into a vee out the tail, which is one of the reasons it turns so well. Combined with the light weight, the board goes on rail easily. One of the other big things I noticed is how well it turns backside. Much easier to bring it around and snap into a line going left. With the 10-2 production, because of the weight, once you got it going in a direction, it was hard to get it to come back. The 10-0 is much more responsive and sensitive to direction changes.

At first launch, there seemed to be a bit more instability paddling the board, but for now I am attributing that to the lighter weight of the board and a slightly different bottom shape designed into the 10-footer. It didn't take long to get used to the slightly increased feeling of instability, which I would characterize as a sort of wobbly side-to-side feeling. (Interestingly, this is the exact same feeling, only less, that I experienced when I paddled Mash's 9-2 Stamps SUP. Again I am speculating this to be from much reduced weight first, and concomitantly a more surfing oriented bottom shape, along with a pulled nose and tail on the Stamps SUP, second.) I'm sure that after I get used to paddling the 10-0, and it becomes more of a subconscious practice, jumping back on the 10-2 will be like standing on a floating dock.

I've always liked sanded finishes, and combined with the blended colors and 60's style acid splash on the bottom, the board looks stylish and professional. Ed and his son Mark built the boards together, and they used a proprietary vacuum bagging process they have perfected over the years. This should yield a strong and durable shell. I don't know what glassing schedule they used. Overall, the GU Crew did GUuud.

This board is a step up in my SUP journey. It's more like a surfboard you can paddle, than a paddleboard you can surf. I'll post more, like pics, dims etc. in the next few hours or days. But it looks like there may be a few more waves to be ridden before the next set of storms rolls through.