The Good, The Bad and The Beaches


I tried to surf yesterday morning early before class but I was denied. The tide was too low and 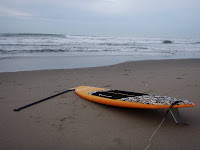 the swell was still too big. Long lines of wind blow waves, caped with spray, flew off the tops of the overhead bombs as they careened forward at once, exploding off the trough for a hundred yards in either direction. Always somewhat demoralizing to head home in a dry wetsuit.

Today was different though, the swell and wave size had dropped and although the tide was even lower than yesterday at 0800 when I paddled out, it looked more manageable...sorta. I made the long walk down from the parking lot to the sand and stood there for a while, no shoulders or corners plainly visible to me. "Screw it, at least I'll go for a paddle." I walked down coast, past 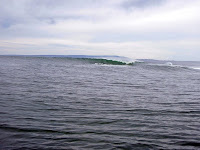 the eroding and crumbling sandy cliffs and almost to the white apartments. Across from that landmark it looked like there was a small channel if I played it right. I managed to take an angle out during a lull through two big peaks, that had they shifted just a little, would have closed out right in front of me. Mercy was shown.

I spent the next hour paddling down coast, stopping, checking spots and trying to find a ridable wave that wasn't closing out or dieing in a hole. I finally stopped a mile away and turned around. Although the wind was blowing offshore, the direction was predominantly east, wind blowing side shore or into the faces of the 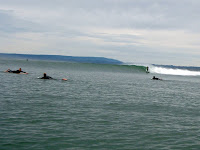 waves. This was putting a small wind swell on the surface that was rolling waves SIDE shore, perpendicular to the waves rolling INTO shore. Weird for some places, but not here. Also, because of the lower tide, rip currents were everywhere. Every time I found a peak that looked halfway decent, there was a big rip just outside, chopping up the sea surface.

As I paddled back, past a place that had seemed like a "maybe" except for the rip, a multi-wave set poured through that was quality. A rip was still outside, and the set shifted down coast on the way in, causing it to close out on the inside, but it was ridable and had that look that you look for. Long story short, as the 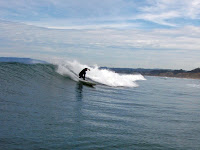 tide came in, it just got better. I surfed there for the next three and a half hours (an hour of it by myself) in consistent 3-5 ft. faces with some o-head waves. Two other SUP surfers came out after a while and I thought how cool! All the laydown surfers will see three SUPs on a peak and it'll be poison...at least for a while. After a while people caught on though and we had longboarders and shortboarders surfing and sharing until I was too tired to keep surfing. Sets became fewer and further apart as the tide rose, but conditions settled and it even got glassy for a while. The wind never turned onshore. It stayed offshore or off-sideshore the entire session. 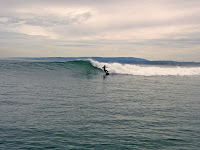 I still had the Pivot fin in 'cause I thought the waves were going to be a lot smaller. The fin holds real well in steep waves, and kept the board on a smooth and steady course, never tracking. The board never hung up on the steep drops, or bogged down at any time. It surfs like a good, versatile longboard.

It being Saturday and town probably being pretty small, a local ISF contest was up and running at the main beach. The contest shirted high schoolers were on a good left so I paddled way upcoast from them and paddled in. Today's waves will probably have to hold me for a while. Another system is coming through and 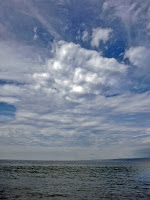 forecasts are for rain and a lot of south wind starting tonight and through Monday. Good, I gotta some rest after all the good waves today.