Weather wise, it just doesn't get better than this during the Fall season. Even if the fading away north Gulf swell was completely gone, I would have paddled out. The day was just too beautiful 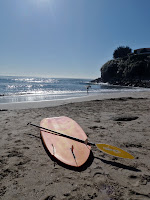 to avoid or miss.

I waited for the tide to turn, knowing it would be small and inconsistent, hoping for a little tidal push that might spike wave heights. My almost two hour paddle surf started at Sarge's in a light to moderate WNW breeze, and ended surfing an inside reef down coast from GDubs. Sets were provided by the gulf swell, and a few in between smaller waves were thanks to local wind swell. Today was perfect for a SUP...cleaning up a lot of small waves on unpopulated reefs.

Even at a 2.5 foot plus tide rising, the kelp is super thick in spots. I got knocked off twice, and Paul, who was surfing with his son Will, got thrown off his board once. Later, Paul told me that Will just got sponsored by Source. Dad and son were surfing GDubs where Will was putting on a nose riding clinic. Will is just a wave catching 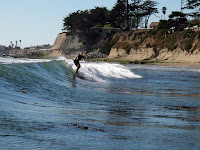 machine, and I know he spent 80% of his standing time on the tip. He's doing well in competitions and who knows, maybe he'll be world champ one of these days.

Note: The one surf pic included here is an experiment with the Olympus camera. The cam is set to multiple frame shooting, zoomed in, asa at 400. I've had little luck getting good focus with the camera zoomed in on multiple frame. Today focus was better, but the images really grainy. More experimentation needed.