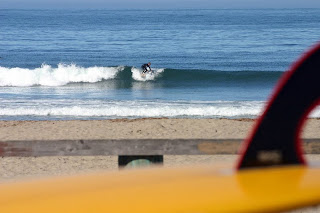 The swell dropped off a lot last night and the water temperature shot up. Shed my booties and swapped out the integrated hood in my Mutant for the open neck zippered pull over. Even though the water temp rocketed up almost three degrees to 55.9F, I still opted for a light neoprene cap. It kept me just right for the two hour dawn patrol session. It's so great to be back in bare feet again.

Yesterday's 4.3 foot at 12 second WNW wind swell had fallen off to a 2 feet at 10 seconds West swell, but that's about the same as last Thursday and I had fun then. It was enough motivation to set the iPod alarm for 5AM and an 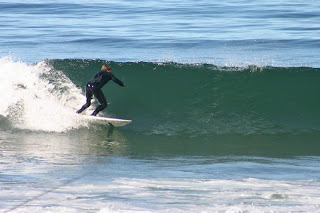 early start. Still late for true dawn patrollers, but I thought it would work OK for my beach break. I paddled out at 0630 and surfed for an hour by myself before another shortboarder joined me for the rest of the session. As the line up started to fill up around 0815 I headed in.

Waves today were not peeling as uniformly as the last three days. Lot's of close outs. Not many rights either. But the shortboarder surfing with me was goofy, and I saw him get a lot of waves, some not bad lefts too. Maybe it's just me or maybe a change in swell direction, the shape seemed better with the WNW direction. But who knows, with beach break you show up and get what you get. No promises.

Talked with Paul as he was about to catch a few on his big yellow longboard. His son Will is doing really well on the longboard contest circuit, and has been bitten hard by the competition bug. Who knows, 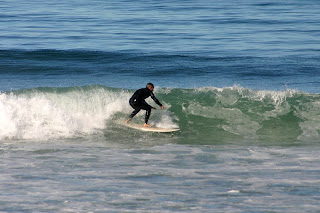 maybe a pro longboarder? Helluva noserider that's for sure. Lot's of hard work and dedication ahead if that's the road he wants to travel. Will started surfing late in life, fifteen or so and only three years ago. We both marveled at how far and fast he has come.

Also chatted with Jeffrey for a bit, him recovering from a motorcycle injury. I teased him that at his age his bike days should be over. He got racked pretty good and this was his first time back in the water in over a month. He reminded me of the water pics I had taken of him a while back at GDubs. Yesterday Melissa reminded me of the pics I taken of her at Ray's...a long time ago. It felt good to me that they enjoy the shots. It's just for fun, and after all, that's what it's all about. Fun, fitness and stoke. It'll make your day, every day.

As Herby says, "Without vision the people perish; with Stoke, the people flourish!" Say Amen somebody!
Posted by srfnff at 12:34 PM