I finally made this morning's dawn patrol after missing some good waves yesterday. The angle on the south isn't really optimal for the Reefs, which is perhaps one of the reasons it's been so

inconsistent, although inconsistency is a hallmark of the south swell. I almost didn't even make the attempt 'cause the data on the buoys and CDIP looked pretty dismal. But all the forecasts were solid...there had to be some more waves this morning. As I drove up to the overlook and got out to check it, I was greeted by a nice set of small waves peeling over the kelpy low tide reefs. Game on!

I paddled out at 0618 and Sarge's was just section after section in shallow water filled with kelp. Jamie and John were already on YH, so I headed there and shared some small ones for the first part of the session. After a while Greg paddled out and joined us on his 10-10 Angulo.

Eventually I headed over to the stairs, being lured there by a couple really nice six wave sets. Even though the rides there were short, there was some size to the waves and I got a little adrenalin going which helped with my wave jones. Sam was out on his (old) PSH 9-2 AA stand up, and he got the wave of the day that I saw anyway, picking up a nice head high bomb with a long sloping shoulder that took him way inside before it closed over the shallow and unmakeable reef section. Sam's cousin Allan was taking some good waves on his SUP.

It was cold this morning. Air temps stuck at 49/50 degrees, and all the solar gain we picked up 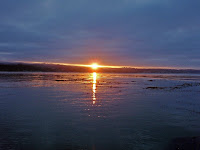 in the water has disappeared. Water temp at paddleout was 49.8F. More than one surfer said it felt like winter again. Especially after the southwest winds started up soon into the session.

But all in all even though the waves were inconsistent, there were some really fun ones when the sets came through. As usually YH was smaller than Sarges. Joanna said she had a two session surf on Friday and the wind went offshore for a while around noon. Still, she said today's session was more fun overall, and she thought the waves were just a bit better. I'll go with that. 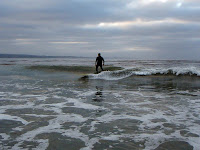 Again, I didn't get much in the way of pics with the Oly, just a shot of John on his 11' Munoz (big man, big board) on a very small insider at YH. I just didn't seem to be in the right place at the right time, or if I was, I played major fumble fingers getting the cam out of my wetsuit.