Fading WNW the Reefs and Small Mixed at the Beaches 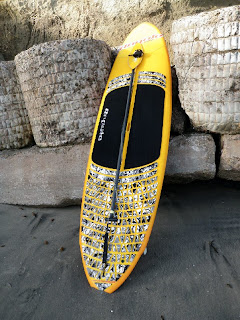 First surf of the year was in the remnants of a fast dying, but much bigger earlier, WNW ground swell. I woulda surfed first thing in the morning but Roy's memorial was at 11 and Leah wanted me to sing with her so that took priority.

I arrived at Sarge's at 3:15P to find a pulsating mass of people and no place, and I mean no place to park. WTF? Yeah it's a weekend but really? No place to park. So I double parked at the gate unloaded my SUP and paddle. Like I said, everyone was there so I ended up chit-chatting with four or five different people, checking the surf from the overlook and amazingly enough, while I was doing that a spot opened up right at the gate! Hallelujah! Who says there is no God?

While I was warming up Larry appeared at the top of the cliff and I yelled at him to join me at Yellow House. It was small, small, and smaller there, but the tide was dropping (a good thing) and there was only one other SUP surfer so I knew we'd have it to ourselves, more than likely we'd know the SUPer and for sure we'd get waves and have some fun.

It was more fun than I thought. Mo was out on his Mizuma custom SUP, and Larry and I were on our Angulo's. As the tide dropped the sets picked up and 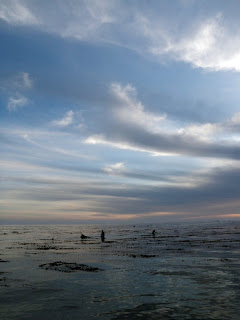 although it never got over waist high, the inside section was working and some speedy rides were had through that, accompanied by a fun take-off section.

We surfed until dark which is becoming later and later now that we've past the solstice. YES! Let's hear it for more daylight. The swell was definitely heading down, and by later this night, it would be all but gone. 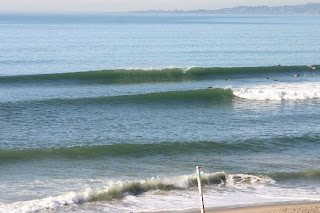 January 4, 2010
For the first time in a while, the beaches were small enough to ride. We've had so much wave energy these past few weeks that the beach breaks have just been macking. And conditions haven't been all that great either. Today however, the weather was just about as good as it gets, and the small surf was peeling nicely over numerous, newly formed sandbars.

I was hoping I could ride the 5-11 Ghostbuster and I got my wish. The surf was perfect for it. Since the reefs were too small to break in the small, mixed WNW/WSW swells, the crowd was on it early. (It's still Christmas vacation after all. And anyway, EVERYONE here surfs! No lie...everyone!) The tide was rising and a number of bars were working, all of them crowded (for the beaches). I started out wide on the most populated break, but after a couple waves moved 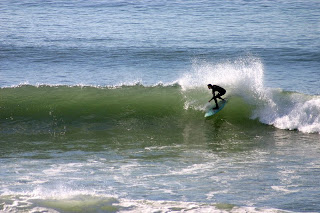 down coast to an empty bar that wasn't all that great. None-the-less, I got my pick on any wave I wanted, and had some fun and fast rides on the GB.

When that started to slack off in the higher tide I paddled over to the main pack and took a couple, and then headed up coast for a few more. By then my wave count was through the roof and I was pretty tired. I took one in and called it a day.

Usually this spot has waves with a lot of pop and push, but today it was almost mushy. The waves were beautifully shaped but lacking a certain amount of the normal sizzle. Kinda strange but not bad. It was super consistent and the crowd factor wasn't all that inhibiting, 'cause everyone was getting lots of rides. Even though the incoming waves weren't their usual energetic selves, the side shore current was very active. No such thing as sitting still unless you want to move down coast and down current in a hurry. 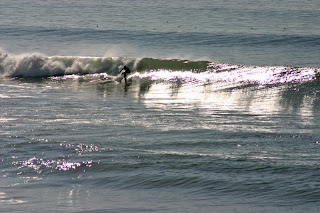