Friday January 14, 2011
The spawn of yesterday's short duration low pressure trough and rain was thick as a brick ground fog. Fifty foot visibilities at best for most of the drive to Mbusas, but a mile from the destination the fog cleared for good and it turned into a beautiful fogless and cloudless morning. 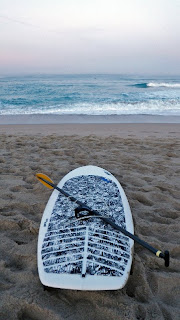 Big Al was checking it when I rolled up and got out for a short pow-wow. It was bigger than last time, but a definite lump, with rolling seas and troughs plagued the line-up at all locations. And it was fairly inconsistent. But it was the last day before a three day holiday weekend so we're on it. Hardly anyone was out.

It was a challenging one hour session in all of the above. Every once in a while a couple decent peaks would roll (literally) through but the wave faces were never quite free from that wind induced chop that had accompanied these waves from miles out to sea. It was a struggle to maintain my feet in the backwashed rollers, and I spent a lot of time on my knees chasing the peak and getting back in position while the current insisted otherwise.

But I'm glad I got a surf in before the holiday. Thanks to Al for his great pics. (He's using a Luminex and I'm finding that his shots are a little bit better in quality than the Olympus I've got. They're close though.)

Email blog posts do not show embedded movies or slideshows. Go to the blog to see those visuals.
Posted by srfnff at 3:37 PM