Tuesday January 4, 2011
With La Nina still firmly in control, the North Pacific managed to muster up a series of 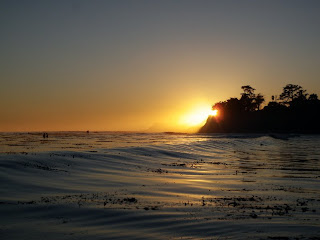 back-to-back WNW swells that finally (after a drought like hiatus that stretched back to November 2010) put some real long period energy into our little corner of the world.

The first swell made landfall a couple days ago during a two-day rain storm over the weekend. Weather related winds made conditions not that great, and the rain run-off pooped up the water, but the swell was ridable even though "iffy". Waves dropped down in size on Monday, before the next swell arrived Tuesday. Monday I drove up north to Davenport Surf and Sail to have Joe measure out the SIMSUP for a new board bag. M and I are heading to Mexico for a couple weeks in March and I'll need some good protection for our travels. I checked a couple spots up there after all the calculating was done. The tide was high and it was large and lumpy with the NW wind on it. But the swell was showing very well.

I waited until Tuesday afternoon when all the models showed the swell peaking. I paddled out at 1530 heading to Yellow House in hopes of some zippy small wave surfing there but it wasn't to 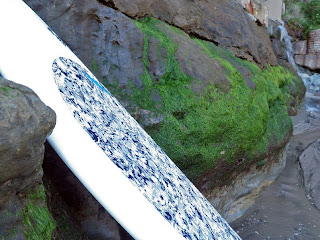 be. 8-10 feet at 16 seconds still wasn't enough juice to turn on YH even with a low, going lower tide. As expected it was fairly crowded but it was also consistent enough to grab quite a few waves. I surfed a couple spots, chasing waves at the point, then moving to Apt. House Point, etc. Meanwhile I was looking up coast to Sarges where the grass looked greener.

After an hour I paddled up coast to the next spot. Only a few people surfing there and they were spread out because the tide was so low it was putting up some serious sections across the reef that a higher tide would have connected. The waves were actually very good, 3-4 ft. long fast zippers screaming across the kelp infested shallow water reef. That was problem, the kelp. If the kelp was thinned out, or not even there I'd give it an 8 or 9. But with all that kelp growing unchecked it was a 5 or 6. I got knocked off several really nice waves before I reverted to kelp riding technique which is to carry your weight back on the fins and try to blast through the tentacles before they grab you. This worked fairly well and I got some good ones. But it was seriously easy to get locked up in the kelp forest this afternoon.

Forecasters are calling for more swell through the weekend and everyone's happy that at least we're getting something resembling good ground swell.