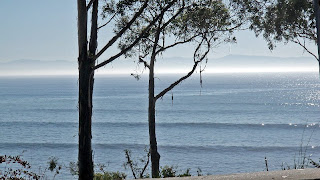 After an almost two and a half month drought, we finally got some real Winter ground swell which generated high energy, sizable surf throughout the region, and all my local reef surf spots. As per usual the upcoast reefs tended to have more size than those to the east, and during the best tides, the most popular spot was firing. Sets were slightly inconsistent, to be expected with such a long period swell, but surfers were getting the best rides in a long time with long walled lines putting up 200 to 300 yard rides on the best waves. 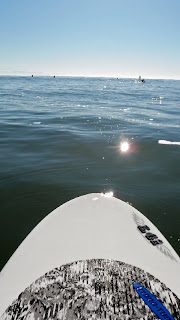 session. I surfed for four and a half hours, from about 12:30 to 5PM. I rode waves from Lower GDubs through every spot east to the Pier. I started out at YH but the tide was a bit too high, even for the large swell. So I headed over to Sarges which was absolutely PACKED with surfers. The guys who knew the place the best, were getting the best rides (natch). I saw Boots, Larry, and Paul surf some stellar examples of how good it was. I was able to get a few myself, no set bombs however, so after a while I moved over to Middles, then Lower GDubs where I got a couple of my best waves of the day. I almost pulled off a ride from Lower G's through Sarges, but got sectioned out at inside Sarges.

Since I had traversed so far down coast after that wave I just kept paddling, looking for some good waves east of Sarges. By that time the dropping tide had opened up a lot of new spots on the reef and I got a couple good ones off Nudies and into YH. I surfed there primarily for the remainder of the sesh, taking down a lot of fun, fast waves. With so much west in the swell there weren't a lot of waves connecting up for long rides. It was pretty much surfing from section to section. But there were very few close-outs, you always had a shoulder/wall to ride for at least 50-60 yards or longer. During one 16-20 wave set (I lost count) I surfed from YH to Dick's to the Pier, and then took two more waves at the Pier section before making the long paddle 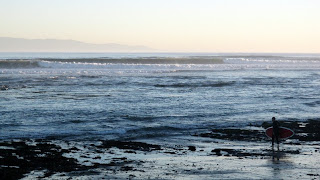 back out to YH. Amazing!

By about 4:30 I was feeling pretty spent, so I headed upcoast for the take out at the main spot. I snagged one last bomb off Nudies that took me in, a steep fast drop into a raging wall that sectioned (I made that one) backed off for a nice cutty, then turned back down the line for a racing finish into a crashing falls of whitewater and kelp. Sweet way to finish and apparently inspiring. As I was walking to my car Dave was heading out...again, for his second session of the day. "Double sesh eh Dave?" I said. "Your last wave inspired me, I had to go out." Cool.

Today surfing in the kelp at low tide was an issue, but not nearly as much because of the larger 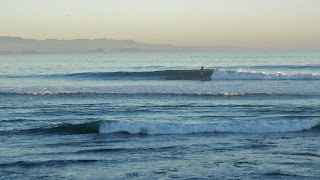 swell. I got "kelped" a couple times but not completely knocked off. Getting kelped today was a matter of getting slowed down enough (when hitting the kelp clumps) to reduce your speed so you couldn't make the wave. If there were no kelp slow-downs, making those waves would have been awesome.

But no complaints. You get what you get, Mother Nature does her thing and you live with it...make that "rejoice" with it.

For the final capper Ralph offered me a beer as I was carrying the SIMSUP back to the car. In the dimming sunset saturated light, with a lot of good waves still pumping through, how could I refuse such an offer? So Ralph and I drank beers and talked story until it got almost too dark to see. Dwayne and Eric wandered up and we dished surf stories, talked board talk, did the surfer thing. After a full day of surfing, sharing with your broheims is the icing on the cake!

NOTE: Not much in the way of pics or vids from this day. I tried to shoot movies in the line-up but lighting conditions were horrible; shooting straight into the sun almost, which put gnarly vertical lines through all the movies. When I finally got some decently exposed movies, I wasn't in a good spot and had to haul ass out of the way of an incoming section so the movies were super short and didn't show much. I put a couple in, but they are not impressive compared to how good the surfing was. Thinking about getting a new cam.