Paddled out this morning into a sweet and warm winter day. Not a cloud in the sky at 0650 and a light offshore breeze on the face of the deep. Priscilla and Patrick (who got the best waves of the early morn session) were already out. Priscilla paddled down to the next peak north while Patrick prodeeded to shred the pelagic, new dawn offerings. I was the first SUP rider out, but was quickly joined by Mash, MikeyB and Joe (after a short while). 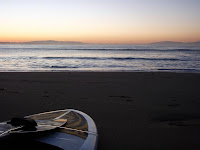 The swell is resting for a bit before kicking up again. There's a 20 second period in the water at the farway buoy. That buoy usually indicates for the farshore buoy. I'm thinking sometime this afternoon we might see some forerunners.

We had a blast this morning swapping boards. I got to surf the Mahi1, set up with the 2+1 fin config and a 9" center fin. Joe surfed it too. Mash and Joe surfed my Angulo Olohe. We didn't have time to compare notes in depth because everybody had to get going after surfing but this could make for a great bull session in the future. 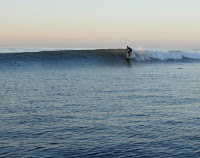 I finally switched in the fin on the Olohe that John sent up with Mash, a Greenough 9" cutaway, and was blown away at how well it works. I got to thinking that the Olohe is pretty flat rockered and might nose ride well with a different fin set up from what I had been riding (2+1 with flexy 9" Preisendorfer center fin). Wow...what a difference it made. I slotted the fin all the way back

in the box (shoots, if you're gonna do something...do it!) and removed the two side-biters. As a single fin, I was afraid the board would really be hard to turn...not so. And the difference it made in nose riding was day and night. I didn't get a legit five or ten, but I was parked on the front 1/4 of the board for many a ride. And the fin didn't seem to take away from the straight-line speed of the board. Thanks John!

I totally got off on the 10' Tim Stamps built Mahi1 and was carving it pretty good. Mash reminded me that the board was built for a 200-225# guy. For sure it was too big for me...but I kept thinking of the possibilities. I could probably ride that board at 9'4"...maybe smaller. It made me start jonesing again for a SUP performance board. It's a good thing Tim lives in SoCal, if not I'd probably be standing at his counter right now instead of writing this post.

The diamond tail on the Mahi1 coupled with the width at the tail and through the center makes for a very stable board. The Mahi seems as stable to me as the 31" wide, 11'9" Angulo Nui, and that's a stable ride. No problem standing, paddling or catching waves with the Mahi. Because it's made for a bigger guy, there is too much float in the board for me, especially at the tail. But the

diamond tail shape is loose as a goose on Exlax. Even at 150# I was able to move the board around pretty well and on my first chest high wave was able to carve a legitimate bottom turn. The board wants to go on rail as opposed to the Ohlohe which turns more by pivoting...like a long, flat longboard which is what it is. But truth be known, the Olohe is a great all-round SUP which will surf and paddle with the best of them. It's just not what I would call a performance board...not at my weight anyway.

But I've been suspecting the obvious for a while...must start building Quiver. It used to be just two, now I'm thinking three. A coastal day cruiser like the Nui; a solid all-rounder for surf and paddle, like the Olohe; and a performance ripper, like the Mahi.

Thanks to MikeyB for taking the pics of me and Mash.